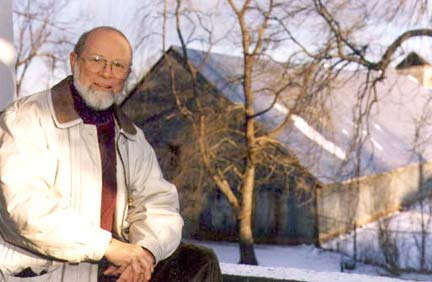 One of the more significant contributions in the game of ice hockey involved the dedicated research and written account of the sport by retired surgeon and author-historian Garth Vaughan of Windsor Nova Scotia.  His written works on the sport include “The Puck Starts Here” and “Tommy’s New Block Skates” as well as other research and publications.

While he was an avid follower of the sport since childhood, his work on the history of ice hockey began in earnest following a presentation at the bicentennial of Kings College School in Windsor, NS in 1988.  It was here that Gordon Hughes, also from Windsor, Nova Scotia arranged a public announcement of Windsor’s role in the initial development of ice hockey. This initial research and Garth’s work that subsequently followed, expanded and solidified the foundation for the claim that Windsor, Nova Scotia is The Birthplace of Hockey.

Written content from Garth’s research included within the BirthplaceofHockey.com website is vast and detailed. It includes with permission his written and copyright protected work in the following sections:

*Through Garth’s research on the origins of ice hockey he allows you to tap into the romance of the game. He opens doors that will allow you to check out the roots of Canada’s great official winter sport. The Birthplace of Hockey website, initially designed by Garth Vaughan and his daughter Holly Hammet-Vaughan will serve as your definitive guide to the origin of ice hockey.

It provides a real treasure trove of information of the early game, photos of teams, players and equipment.  Learn about home-made wooden pucks, sticks hand-carved by the Mi’kmaq of Acadia, and block skates forged by local blacksmiths as the game took form in the early 1800s.

Get in touch with world-famous Starr Hockey Skates made and used in Nova Scotia a decade before the game was played in Montreal and two decades before it reached Kingston, Ontario.

Familiarize yourself with Windsor, Nova Scotia, The Little Town of Big Firsts, one of North America’s oldest and most outstanding towns where much happened long before it happened elsewhere in Canada – including Ice Hockey.

*This section was originally written by Garth Vaughan in the first person as an introduction in the initial website. Since Garth’s death in November 2012, the introduction has been modified to provide direct attribution to him for the benefits realized through the use of the website.