King’s College, Windsor, Nova Scotia c.1800
from an early sketch of the college by Charles Cogswell

Before long the academics among the Loyalists decided that a place of learning was required for the youth of their new settlement, and set about to build a British college.

Since the Americans changed English names of streets and institutions in order to rid themselves of all things suggestive of British rule following the revolution, the name of King’s College, New York was changed to Columbia University and remains so to this day.

Therefore, when a place was found in Windsor with beautiful rolling hills and great pastoral beauty, plans were drawn up for a new King’s College, which was built immediately, and founded in 1788. It was Canada’s first college and meant that boys would not have to go overseas to get an education in a British college.

The professors at the new King’s College came from England, Scotland and Ireland, as well as from America, and students came from all over the British Commonwealth. 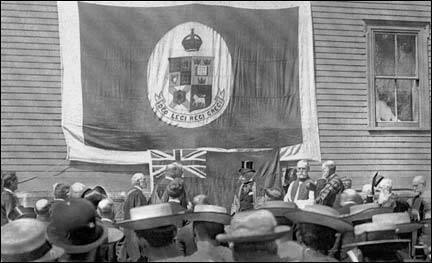 The professors introduced the students to their own national field games, such as Scottish Shinty, English Cricket and Rounders and Irish Hurley. Eventually, the latter two games were to have far reaching effects on the culture of both America and Canada.

Rounders had already become established in America and went on to develop into the Massachucetts Game, the Town Game and eventually into America’s great summer game of Baseball.

At the same time at King’s College in Windsor, the Irish field game of Hurley became popular and eventually developed into a winter game called Ice Hurley which in turn became Ice Hockey in Nova Scotia – Canada’s great winter sport.