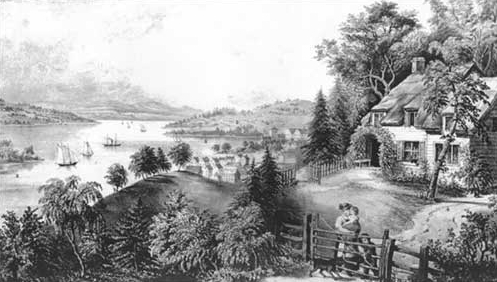 Windsor, Nova Scotia is a small town on Canada’s east coast. It is referred to as The Little Town of Big Firsts because of the several things that occurred there before any place else in the country, as the Canadian nation developed.

Inhabited originally by native Mi’kmaq, it was settled by the French Acadians in 1684, making it one of the oldest settlements on the American Continent. Home to the oldest running Agricultural Fair in North America (The Country Fair) – 1765, Home of the Father of American Humor, Thomas Chandler Haliburton, -1796, and his fictional character ‘Sam Slick’- 1830, it is also the site of the first Stage Coach Line in the Maritime provinces -1816, the Longest Covered Bridge in Nova Scotia – 1836, First Public Railway in the Maritime Provinces -1853, as well as the Birthplace of Ice Hockey – 1800.

The French established a colony at Port Royal in the western end of Nova Scotia in 1604. Gradually, they moved along the shores of what is known today as the Minas Basin, building dykes and reclaiming fertile land for farming as they went. By 1684, they had arrived at the junction of the St.Croix and Avon Rivers at a point known to the Mi’kmaq natives as ‘Pesegitk’, which the French called ‘Piziquid’, later to be called ‘Windsor’ by the English. The French named the entire area which they came to settle ‘L’Acadie’ and themselves “Acadiens”. They excelled at farming and lived in harmony with the itinerant natives who had long had encampments in the food rich area. 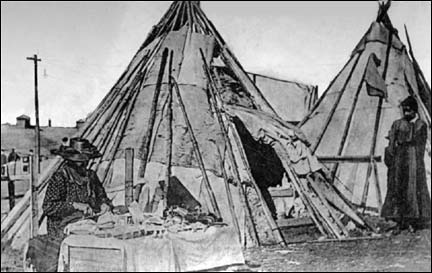 The caption for this picture reads “At an Indian Village Near Halifax, N.S.”

Soon the English settled in the province and founded Halifax in 1749.

They were not long discovering the fertile lands on the shores of Minas Basin, then known as ‘Bassin des mines’ (in reference to local mines), and the abundance of fish in the waters there abouts.

They called the French Catholic inhabitants “Acadians”, and referred to the Mi’kmaq as “MicMac” or “Indians”.

The English did not get along well with the Acadiens or the Mi’kmaq and in 1750 they built Fort Edward, high on a hill overlooking the junction of the rivers, with a magnificent view out over Minas Basin. The Block House, Officers Quarters and Provisions buildings with cannons and a surrounding moat were meant to protect them from attacks from both the natives and the Acadians.

Conditions between the English and French factions worsened and the English eventually largely decimated the Mi’kmaq, and in 1755, arranged to round up the Acadians, burn their homes and farm buildings and expel them from the lands by ship, taking them to the eastern shores of America.

Many of the Acadiens remained there permanently and became known as Cajuns. Others found their way back to Acadia and formed small French settlements in various parts of the provinces of New Brunswick, Prince Edward Island and Nova Scotia, where their offspring are still known as Acadians.

Following the Expulsion of the Acadians, the English changed the name of the town from Piziquid to Windsor, and gave the name of Avon to the river. They then called for immigrants from America and the British Isles. Soon ‘Planters’ arrived from New England and settled much of the land which the Acadians had cultivated. Groups of people arrived from Ireland, Scotland and England and made new homes for themselves in the Windsor area.

An American Rebellion against the English, known as The War of Independence soon followed in America. As hostilities were resolved with an American victory, those who remained loyal to the British Crown then left America for Canada, and many of them settled in and about Windsor. These United Empire Loyalists represented a cross section of the population of the land from which they came. Some were farmers and tradesmen while others were academics and professionals.

Agriculture was important to all and the new settlers made great use of the fine soil prepared by the Acadians. By 1765, an Agricultural Fair was established at Fort Edward, and with the fair, Horse Racing began as a serious sport.

Windsor, Center of Culture and Learning 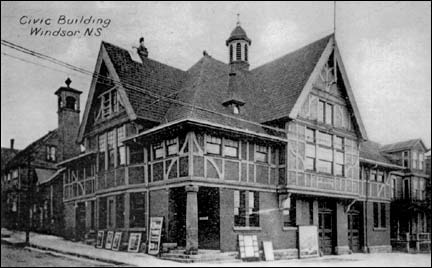 By 1790, Windsor also had a Library and Reading Society in addition to the college, and the town had become recognized as a Centre of Culture and Learning.

Wealthy Haligonians registered their children at the college and were coming to visit regularly and partaking of the wonderful fishing, hunting, cricket and hurley matches and horse racing. 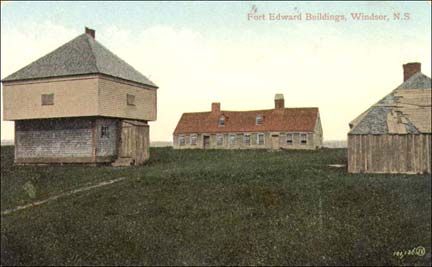 Because of all the sporting activities at the college between the students and the military of Fort Edward and Halifax, journalists began to refer to the town as the Playground of Halifax and the Athens of Nova Scotia.

Windsor had quickly become a place of some significance in the British Empire and of very great importance to Halifax. All this activity led to the necessary improvement of the sixty mile road between Halifax and Windsor, for it was used more and more as the years sped by.

It was the longest road in the province at the time, and was as important to the military as it was to the citizens of Halifax. 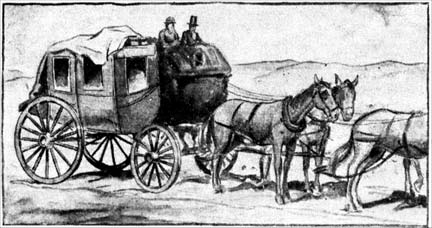 Drawing of the Stage Coach Line from 1816

Travel by horse and carriage was difficult and took about six hours. By 1816, a stage coach line had been instituted and was the first in the Maritimes. The trip cost $5.oo and took the better part of a day.

Written beneath this picture was – ” Above is a reproduction by Robert W. Chambers, Staff Artist of the Halifax Chronicle, one of the old stage coaches which operated between Halifax and points in the Annapolis Valley between the years 1829 and 1869 when the railway was opened between Windsor and Annapolis.

Unfortunately the original photograph of the coach, the property of Miss Lillie Manning of Greenwich, King’s County, was not suited for reproduction but the above sketch is accurate in every detail and was carefully drawn from the original.

According to A.H.W. Eaton’s History of King’s County, the fare in this coach from Halifax to Annapolis was $10.00, the journey occupying the best part of two days. The History also relates an interesting story of an accident on the line when sir Charles Tupper was a passenger, escorted by Coachman Walsh.” 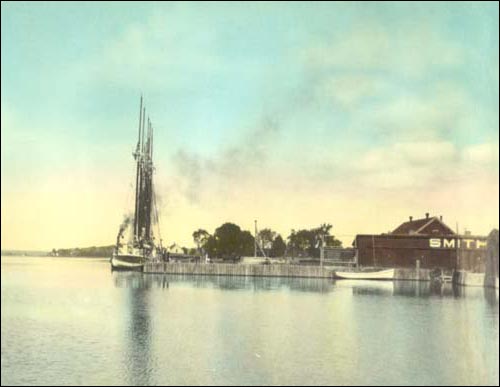 In 1836 the longest covered bridge ever to be built in the province crossed the Avon River at Windsor, thus connecting Halifax with the bay of Fundy communities and Establishing Windsor as the “Gateway to the Annapolis Valley”.

Because of the lumber and gypsum industries that were developing, ship building became a necessity in order to transport the products first to America, and eventually to ports around the world. 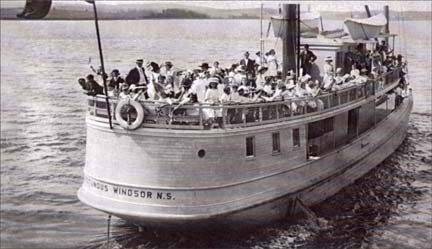 Between 1836 and 1890, Windsor became a world-renowned sea port and ship building centre, the third largest in Canada, second only to Montreal and Saint John, New Brunswick in terms of goods shipped. Ships from Boston and Saint John visited Windsor regularly where passengers accessed stage coach transportation to Halifax. 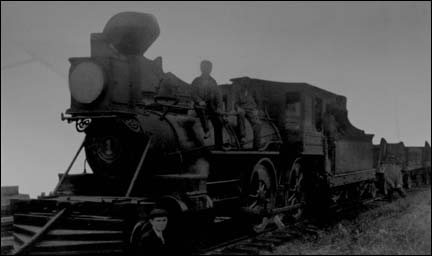 As Haligonians’ need for agricultural and forest products from the Windsor and Minas Basin area became greater, transportation had to improve.

Plans developed for a railway line, and in 1856 the first public railway in the province, the Nova Scotia Railway was built between Halifax and Windsor.

It was the first link of the Dominion Atlantic Railway that would eventually cross the Avon River, making Windsor the Gateway to the Valley and connecting all points in western Nova Scotia with the capital city of the province, Halifax. 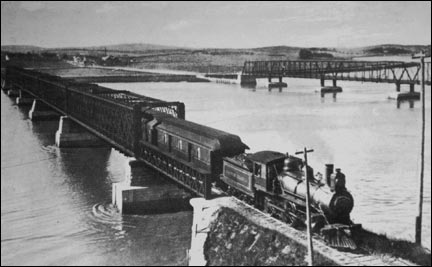 Windsor and Halifax had become great neighbors and were very important to each other. The government continued to improve the highway and the rail service and the college served the city folks well as did the town as a summer resort and source of food and building materials.

Nova Scotia’s first passenger railway ran from Halifax to Windsor, beginning in 1858. Haligonians could thus access Windsor, the “Playground of Halifax”, also known as “The Athens of Nova Scotia”, and “Canada’s First Centre of Culture and Learning”, for it was the site of King’s College, “Canada’s First College” and “The Windsor Reading Society”.

The commonly-called “Halifax-Windsor Railway” was officially known as “The Nova Scotia Railway” and later became a part of the exciting Intercolonial Railway which connected the Maritimes to Quebec and Ontario, which was then known as “Canada”, before Confederation.

The First Station at Windsor, N.S.

The station at Windsor accommodated passengers by allowing them to exit from their carriage “inside” the station as the train ran directly through the station, from end to end.

Commuters expect the same protection from the elements during travel in subways all over the world today, but this was modern technology, a century ahead of it’s time in Windsor.

If Passengers were to continue on beyond Windsor, they would have continued their trip by sea, leaving Windsor’s docks on the Bay of Fundy side-wheel steamer “Empress” to Digby, Saint John and Boston, or onto the Saint Lawrence River, to Montreal or Kingston.

This is the route that the military took from the Maritimes to Kingston, Ontario and the province of Quebec.

At that time, Windsor was the third largest port in Canada, second only to Montreal and Saint John in the quantity of goods and passengers being shipped to world ports on locally-made ships, operated by Hants County sailors.

By 1875, Starr Skates, and Hockey Sticks, hand-made by Nova Scotia Mi’kmaq craftsmen were being transported to the other parts of Canada as the Nova Scotia game of Ice hockey began to spread from east to west, from Nova Scotia to British Columbia, as “Ice Hockey Became Canada’s Great Winter Game!”

Windsor reached its peak of performance in the 1890s when the age of sail gave way to the age of steam and the local ship building industry began to fail. 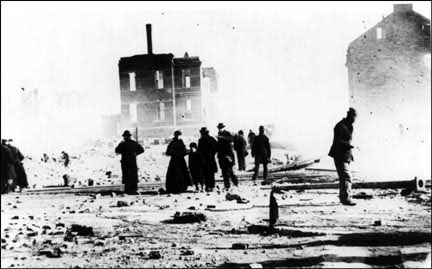 In 1897, the Great Windsor Fire destroyed 4/5 of the town. Among the buildings lost was Windsor’s first rink (built 1870) on Fort Edward. It was the first building replaced in the town (1897), and eventually became known as the Stannus Street Rink . It is believed to be the oldest standing wooden, natural ice rink in Canada. The town was rebuilt within three years but never regained the vitality of those earlier years.

In 1920 another fire burned the main King’s college buildings and a decision was made to rebuild the college in Halifax. Steamboats continued the shipping business to and from Windsor into the 1950s when highway transportation dealt a great blow to the shipping industry of the town.

Windsor is a quiet little town with a population of some 4000 these days, and is struggling the same as most other towns to develop an economy that will allow it to survive and grow. There are several points of interest that presently make Windsor a tourist destination.

The town’s Community Economic Development Association (CEDA) is working diligently to develop an identity for the town based on the historical facts which can appeal to the touring public. Those facts, listed in the foregoing account of the town’s history are listed in chronological order and show why we refer to our beloved hometown as The Little Town of Big Firsts.