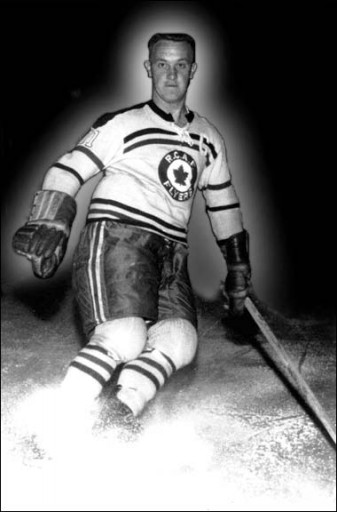 Walter “Mutt” Aker was an outstanding hockeyist from Windsor in yet another era. As a member of the Canadian Armed Forces, Mutt became Captain of the Canadian Air Force Flyers in Europe from 1959-62. His #3 Fighter Wing Team won the European Senior “A” Hockey Championship three years in a row.

Back in the 1940s, as a youth, Mutt had worked at the local natural ice rink assisting the ice makers by scraping the snow off of the ice after skating sessions, between periods and following hockey games in order to get “free” ice time in exchange for his work. The boys who did this regularly called themselves Rink Rats. They had their own hockey team and played on others as well. Most of them turned out to be very good by comparison with others who had less time to practice. Some, like Mutt, excelled. When he reminisces about his long hockey career, he sums it up by saying, “I started out as a Rink Rat, and ended up a champion!”