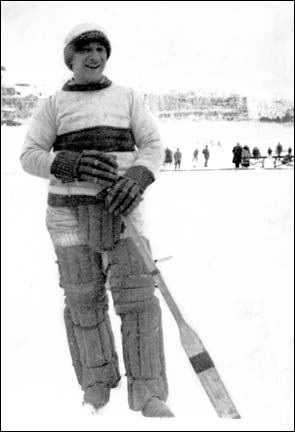 John Dunlop was a Windsorian who was granted a Rhode’s Scholarship while attending Dalhousie Law School in 1923. He achieved prominance as a hockeyist while playing for the Oxford Blues as they dominated the European Ice Hockey scene in the early 1920s. At the time in hockey history when the term “shut-out” was first coined, John Dunlop was a master of the art. Playing on outdoor ice surfaces, mainly on the continent, Dunlop was guardian of the goal as his team-mates scored lopsided victories over their adversaries. Teams which Oxford conquered during the continental tournaments included Cambridge University and senior teams from France, Germany, Switzerland, and Belgium during annual International Tournaments held during the Christmas Holiday Season, when natural ice conditions were at their best.