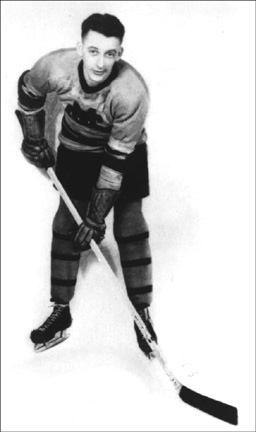 Ernie Mosher, known as ‘The Windsor Wizard’ was born in Windsor, Nova Scotia and began playing Ice Hockey on the many frozen ponds about the town at a very early age. By age 14, he was as good a skater and stick-handler as any senior player in town.

He led the Windsor Academy High School Ice Hockey Team to the provincial championship and quickly went on to senior hockey status. In 1922 and 1923 he led the Windsor Senior Hockey Club to Provincial Championships and then joined the Kentville Wildcats where he did the same, as the team captured the Maritime Senior Championship and the Starr Trophy. His next feat was to captain the Halifax Wolverines as they captured the Senior Amateur Hockey Championship of Canada, winning the highly coveted Allan Cup in 1935. At a time when NHL salaries were low and small Canadian towns wanted desperately to win championships, Ernie Mosher continued to play as an amateur mainly because he could earn more money doing so than he could as a professional. That is most unfortunate because the country missed the privilege of experiencing the magic of his performance skills as a skater, puck carrier, and a challenger – in every sense of the word, for sports writers have claimed Ernie to be Nova Scotia’s all-time best Ice Hockey player.