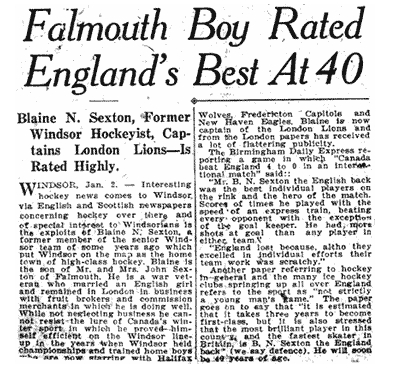 Windsor, Jan. 2. – Interesting hockey news comes to Windsor via English and Scottish newspapers concerning hockey over there and of special interest to Windsorians is the exploits of Blaine N. Sexton, a former member of the senior Windsor team of some years ago which put Windsor on the map as the home town of high-class hockey. Blaine is the son of Mr. and Mrs. John Sexton of Falmouth. He is a war Veteran who married an English girl and remained in London in business with fruit brokers and commission merchants in which he is doing well. While not neglecting business he can- not resist the lure of Canada’s winter sport in which he proved himself efficient on the Windsor lineup in the years when Windsor held championships and trained home boys who are now starring with Halifax.

Wolves, Fredericton Capitols and New Haven Eagles. Blaine is now captain of the London Lions and from the London papers has received a lot of flattering publicity. The Birmingham Daily Express reporting a game in which “Canada beat England 4 to 0 in an international match” said, “Mr. B. N. Sexton the English back was the best individual players on the rink and the hero of the match. Scores of times he played with the speed of an express train, beating every opponent with the exception of the goal keeper. He had more shots at goal than any player in either team.” “England lost because, although they excelled in individual efforts their team work was scratchy.” Another paper referring to hockey in general and the many ice hockey clubs springing up all over England refers to the sport as “not strictly a young man’s game.” The paper goes on to say that “it is estimated that it takes three years to become first-class, but it is also stressed that the most brilliant player in this country and the fastest skater in Britian is N. B. Sexton the England back (we say defense). He will soon be 40 years of age.