The Hockeyists by Garth Vaughan © 1999

Early in the development of the game of Ice Hockey, people who loved to skate were referred to as ‘skatists’.

When the game of Ice Hockey began to catch on, those playing the game became referred to as ‘Hockeyists’.

Many of the earliest of these contributed greatly to the development of the game and must remain forever as unsung heroes because there is no written or pictorial record of them. 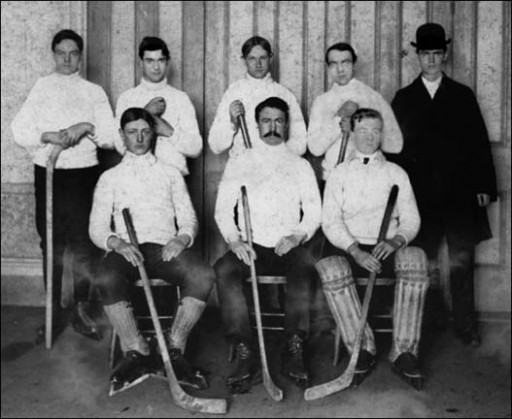 They will be represented by others of note who are shown in this section entitled ‘Hockeyists’ because of their outstanding contribution to the development and spread of our national winter sport.

The original hockeyists had no plans in mind to develop an international league of teams made up of the world’s highest paid specialists of the game. They were interested in the love of a new game which was automatically developing because of its great attraction to boys and young men as an exciting competitive sport designed to fill otherwise long empty hours of cold Canadian winters.

Each Canadian province and territory has its own list of ‘Hockeyists’. This collection begins with some of those on the list of Nova Scotia. Hopefully, other areas will follow suit and create internet web sites dedicated to their own particular Ice Hockey history. Linking such provincial sites could give an overview of the Total Canadian Hockey Experience.