The SWASTIKA is the world’s oldest complex symbol and was used for centuries by many cultures before Adolph Hitler adopted it as a symbol for the Third Reich prior to the Second World War. What followed, resulted in the destruction of countless people and treasured property of inestimable value, and also altered the ancient symbolism of the swastika forever.

The Greeks, Romans, Hindus, Celts, Chinese, American Indians and others treasured the symbol. The swastika was interpreted by some as four “L’s” meaning Love, Life, Luck and Light. For others it seems to have originated as crossed lightning bolts symbolizing a source of great power. To the Romans the swastika meant “Peace”. To the Hindus it meant “Good Fortune”‘. To the American Plains Indians it meant “Good Luck”. To all cultures it was symbolic of something good until the Nazis turned its meaning around completely, to signify evil,death and destruction. They converted the world’s oldest and most loved symbol to the most hated and feared of all. 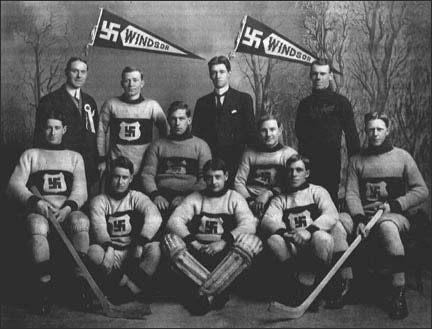 To the hockey fans of Windsor, Nova Scotia in the early years of the development of the game of ice hockey, the swastika meant both power and good fortune. Yes, to Windsorians, “SWASTIKAS” meant a high-scoring top-notch hockey team whose players proudly displayed the symbol on their jerseys and who were almost impossible to beat by other teams in the area. What hockey fan wouldn’t be thrilled to be associated with an organization of that stature! Winning, then as now, was all-important to “hockey towns” and the Swastikas were doing it for Windsor, Nova Scotia, one of Canada’s all-time outstanding hockey towns.

As early as 1905 the Windsor Swastikas travelled to Saint John’s, Newfoundland for hockey matches, and carried on the tradition for a full decade. Word has it that the “Swastikas” were flashy, exciting, entertaining and very seldom beaten.

One photo taken in Saint John’s in 1911 shows team banners, which travelling fans would have waved, pinned to the wall behind the team. The banners bore the name WINDSOR plus a swastika. The manager of the team shown in a 1908 photo, one Roland G. Morton is seen wearing a metal Swastika Team Pin on the lapel of his coat.

The players are all of notable Windsor family names – people like W.A.”Billy” Stephens who later had a department store, and “Mac” Geldert who ran a dry goods store, Walter Regan who was a grocer in Falmouth, R.G.Morton a clothier in Windsor and Halifax, Frank “Sanky” Brown, a stone mason, H.S.Smith, a coal merchant, Clarence McCann, a trainman for the Dominion Atlantic Railway, Frank Sharpe, a N.S. Dept. of Highways engineer, “Ses” McMonagle a well known barber, and of course, and “Lew” Shaw, one of Nova Scotia’s greatest hockey players, who ran a very popular pool room.

They performed well for Windsor, first as hockey players and later as business and family men. The fact that the symbol they once used on their jerseys was made infamous by a tyrant in another country is no reason to hide their pictures from view and ignore the role they played in the life of our community. Therefore the photos of five “Swastikas” Hockey Teams have been located (Thanks to five donors!) and will now be displayed proudly at the Hockey Centre for all to appreciate. Needless to say, explanatory information will accompany the collection.

These stars of the game at home and on the road, not only played like champions, but also dressed according to their role. Managers and coaches sported high starched collars and fancy ties, tie clips and breast pocket puffs. So move over – Don Cherry – WE DID IT FIRST IN WINDSOR!

Since there were no cars in those early years, the “Swastikas” travelled by train where ever they played in the province as well as in Newfoundland. 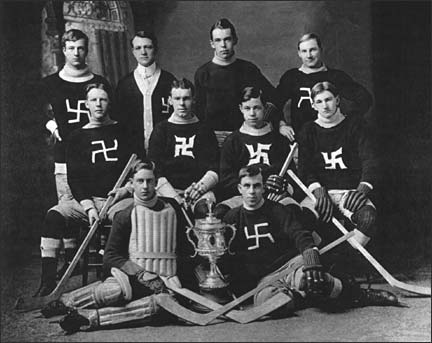 In order to identify themselves from rival teams on the ice, the Windsor Swastikas had both light and dark, “home and away”, uniforms – just like the N.H.L of today! They proudly wore dark swastika emblems on their light uniforms and vice versa. They used “MICMAC” and “REX” brand hockey sticks made by Starr Manufacturing Company of Dartmouth, the source of Canada’s best hockey sticks into the 1930s. Heavy wool turtle-neck jerseys and soft, padded over-the-knee hockey-pants was the dress of the day. Padded leather hockey gloves, just invented in 1904, would have been an exciting new addition to the wardrobe of these ice magicians for no other protective equipment was yet available except for short shin pads. It goes without saying that they used Starr Skates, made in Dartmouth, N.S., loved by hockey players everywhere and known to be the world’s best. 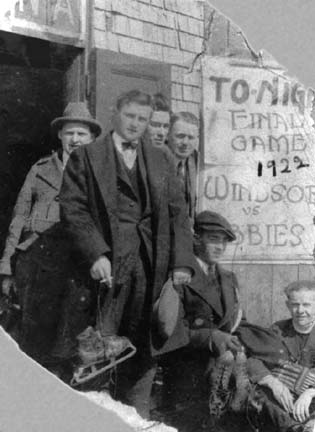 Off the ice, the players used heavy wool-knit button-front coat-sweaters and wool trousers beneath melton cloth overcoats and leather gloves for travel. Head dress was usually a Donnegal tweed slouch cap or snap brimmed felt hat, both of which were popular at the time. Club bags were used to carry equipment.

Player Positions of the 1800s

The names of player positions in that era differed from those used today. It was a seven man team then with a “SPARE” who had to be capable of playing all positions in case of injury to one of the regular team players. During a game without injury the spare did not get to play, for the seven regulars played the entire two period, sixty minute game.

The “ROVER” ( a Nova Scotian hockey innovation ) was a high-scoring flashy forward who could play where he wished.

The “POINT” and “COVER POINT”, as they were known, eventually became today’s Defense.

The “GOAL KEEPER” has since become known as the ‘goalie’. The REFEREE ruled with the help of a brass school bell, and had a “GOAL JUDGE”, also with a hand-bell, stand at each goal-mouth to decide on scores.

Their games at home were played on natural ice in the new Stannus Street Rink, built following a fire which destroyed the town in 1897.

Two Rovers who starred for the famous Windsor “Swastikas” gained wide recognition for their stick-handling and scoring ability. Lew Shaw is an honored inductee of the Nova Scotia Sport Hall of Fame, having been inducted in the founding year of the organization. Blaine Sexton left the team to fight for his country in World War One and took his hockey gear overseas with him. He is credited with advancing organized hockey in Britain and Europe. He became known as England’s “MISTER HOCKEY” for two decades. Newspaper articles of the time show that he was the best and fastest hockey skater, player and goal scorer in Europe. He played hockey for England in the 1924 and 1928 Olympics. Sexton’s photos and Olympic crest as well as his nine-layered laminated childhood puck, complete with hand-carved initials, are on display at the Windsor Hockey Heritage Centre.

The Windsor “Swastikas” frequently won the Western Nova Scotia Amateur Hockey League championship and the coveted and beautiful Halifax Herald and Mail Trophy which can also be seen at the Hockey Centre.

Because Windsor was settled so early (1684) it is natural that many things began here before they started elsewhere in the nation. And so it is understandable that Ice Hockey itself would have originated here decades before other parts of the country were developed. Since hockey was being played here long before the nazis gained power in Germany, it is therefore not unusual that the Swastika would have been used as a symbol here long before Adolph Hitler thought of it. And, of course, it is certainly no surprise that the managers and coaches of Windsor’s teams would have decorated themselves with starched high collars, fancy ties, gold vest-pocket watch chains and breast-pocket puffs, ages before they appeared in “Coach’s Corner” on the C.B.C.’s Hockey Night in Canada.

Other Examples of Swastikas

The Windsor athletes were not the only ones to use the Swastika Symbol on their jerseys for good luck. The women of Edmonton, Alberta and Fernie, B.C. did likewise as these photos attest. Christmas Cards, jewelery, and even fruit exporters used the symbol as well.