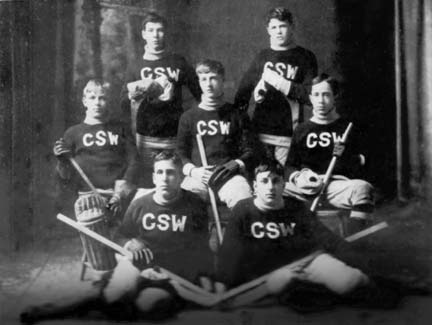 Kinsman, Lovett,
Binney, Dunpuy (captain), Harley,
Jones, Campbell
(Note: This list of names was obtained from handwriting in
the margins surrounding this picture in “the Windsorian” ,
a book compiled from the King’s College School Newspaper.)

Hockey has always been one of the School’s “Star” sports, and certainly last winter’s record was one of which we may feel proud, especially as it was said we had the best team the school has had in years.

As soon as we got back from our Christmas holidays we had our election for captain and secretary, Dupuy again getting the coveted honor of captain, while Binney was unanimously elected secretary.

We soon found we had made no mistake in our choice, as inside of two weeks our team was picked and ready for battle.

Our first match was against King’s College on Jan. 22nd, and after a very swift and hard fought game we managed to come off victorious; score 5 – 3.

Next we played the Swastikas on the 25th. They had a very strong team, and although we put up a hard fight, we were defeated 9 – 2.
(Note: Town of windsor youth had a “Swastika Athletic Club”.)

On the 20th we palyed the Halifax Old Boys, which was one of the most interesting games of the season, the score being even until almost time, when they scored three in quick succession, defeating us 8 – 5. After the game a splendid supper was provided by Mrs. Handsombody, where the late enemies forgot the “trips” and “slashes” recieved in the game, and departed the same good friends as ever.
(Note: Travel between Windsor and Halifax would be by train as motor vehicles were not yet available.)

On the 10th we crossed sticks with Windsor Academy and after a hard fought game defeated them 5 – 3.

There is no doubt that on the 20th we played our “star” game when we played St. Mary’s of Halifax, with whom we expected to have a hard fight if not worse, but we found out our mistake as we defeated them 24 – 3, thus making the highest score ever made by the School.

On March 15th we again played King’s, and after a very fast and even game held our own, the score being 4 – 4.

We again played Windsor Academy on the 17th and beat them 5 – 1.

On the 20th we played All Windsor, and although we put up a stubborn fight we were naturally outclassed, the score being 8 – 2 against us, but I think you will agree in saying that was no disgrace to us.
(Note: “All Windsor” refers to the “All Stars” of Windsor’s 4 senior teams.)

Binney, our “stonewall” was a corker, and more than once saved the day. He was asked to play for All Windsor but had to refuse. We shall miss him greatly this winter.

Mr. Morris at point always played a good, steady game, and stopped many a dangerous “rush”. We are very lucky to have him again with us this winter.

Dupuy at cover was a “peach” and his checking was most effective, as were also his rushes which always ended with a shot that made the goal-keeper jump.

Harley, at centre, always played a splendid game, being very fast and tricky and always on the puck. He will be a great loss to us this winter.

Mr. Handsombody, our right wing, played as usual a good and steady game, and was always in his place when the puck came.

H.R. Jones made a splendid Rover. He was fast and always on the puck, and his combination greatly helped the forward line.

K.Campbell at Right Wing played a good and fast game, and we are lucky to have him again with us this winter.

Last season was one of the most successful in the annals of the School, being scored on 40 times against the 74 we netted.