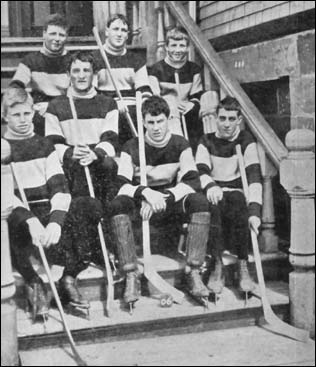 Professors from England, Scotland and Ireland introduced their particular national field games to the students from all over the British Empire who attended King’s College. Students thus came to play the Irish field game of Hurley, and in winter, developed it into an ice game by playing hurley-on-ice on their favorite skating ponds. There were no arenas, Zambonis, shin pads or goal nets then – just simple skates that strapped onto boots, rocks for goal posts, hand-made wooden hurley sticks, wooden pucks, and the will to win a game on their cold and wind-blown, frozen ponds.

King’s College School Boys began adapting the Irish field game of Hurley to the ice as early as 1800, and probably before. They came from all over the British Empire to attend Canada’s first college (1788) at Windsor in Nova Scotia, the first province in the country to be developed. King’s College offered degrees in Arts, Law and Theology. One of the earliest King’s students was Thomas Chandler Haliburton, who was born in Windsor in 1796 and matriculated in 1810 at age fourteen. He later recorded that the boys at the school, circa 1800, played “…hurley on the long pond on the ice…” which went on to develop into Ice Hockey, thus making them the earliest to play Ice Hockey in Canada. The effect that those boys had in teaching the game to others and helping to spread it far and wide, can only be imagined and will never be known for certain. However, they were certainly the first ambassadors of Nova Scotia’s developing game of Ice Hurley and Ice Hockey.