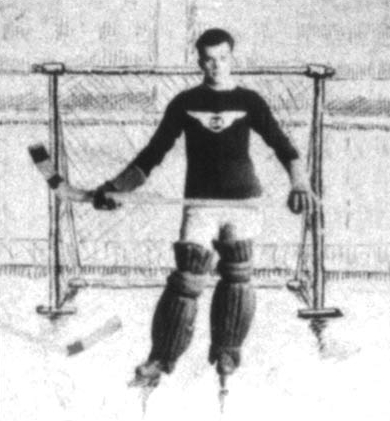 As boys began playing Ice Hurley and Ice Hockey around 1800, the goal openings were indicated by the placement of two rocks on the ice at both ends. For nearly a century into the development of the game, the goals faced the sides of the ice surface rather than the ends. Since there was no net covering the posts, the goal tender could be scored on from either side, or from front and back, which ever way you wish to consider it. While this meant that long shots could not score, it did keep the goal tender very busy guarding both sides of the opening.

In the 1890s the rocks were generally replaced with posts, which were then positioned parallel to the ends of the ice surface, as goal nets are today, but still without net. Although electricity was by then available for indoor use, the goal light had not yet been invented, and, indeed, games were still being played outdoors in many places where covered rinks had not yet been constructed. Therefore, the job of the Goal-Judge who stood on the goal line and called the scores, was still very much in practice. 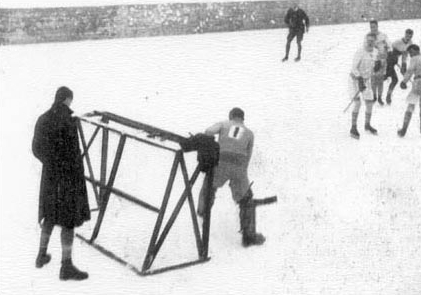 Goal Judge Behind the Box Net for an Outdoor Game

On January 6, 1899, the Halifax hockey teams developed the first hockey goal net called the Nova Scotia Box Net. The Goal-Judge, whose job was markedly facilitated by the net, took up his new position behind the net. The following season, in December 1899, Montreal’s hockey teams tried the nets and they quickly became popular. Within a year they were being used across the nation. It was in this decade that many Canadian towns got their first indoor skating rinks. The rising popularity of Ice Hockey resulted in demand for covered rinks to house the natural ice games, leagues and tournaments which were becoming a vital part of our culture.