The skates used by skaters in Nova Scotia as the game of Ice Hockey began to evolve were hand-made by local blacksmiths. No two pair were alike as the craftsmen used patterns of their own design.

Essentially, the skates consisted of blades of steel imbedded into blocks of wood which were in turn strapped to the skaters boots with either leather or rope fittings. Since wood was often referred to as “stock”, the skates were called by interchangeable terms, “block” or “stock” skates.

Some skates were imported from commercial firms in Scotland, where pleasure skating originated and where the art of skate making was refined. The hand-made Nova Scotia types were cheaper and readily available and therefore much more popular. 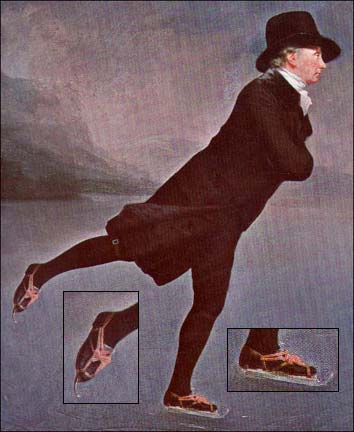 There were ads in Windsor papers dating back to 1830 offering imported Scottish skates for sale from Halifax firms. Most certainly the game of Ice Hurley began on these skates as they were the only type available anywhere in the world at the time. It remained for a Nova Scotian company, Starr Manufacturing of Dartmouth, to invent a better model as the need and demand arose.

With special thanks to the National Gallery of Scotland, Edinburgh for the use of the painting of “The Rev. RobertWalker Skating on Duddingston Loch” by Sir Henry Raeburn
– An  excellent example of Scottish Stock Skates.