(Typed Version of the news article)

“In Nova Scotia the time for ice is during the months of December, January and February. The lakes are then frozen and the ground generally covered with snow, although but seldom is there snow enough before Christmas to make sleighing. Skating is the favourite pastime during December, and, indeed, all through the winter, if – as is sometimes the case – there has been a great deal of snow.

There are some excellent skaters in this province, particularly in Halifax. I have seen young men who could cut their names in German text, or write the Lord’s Prayer with skates on the ice easier than most skaters could cut the “outside edges.” I don’t like to be uncharitable, but I have known some skaters who, I think, would not be able to do it without a written or printed copy before their eyes. Throwing a somersault on skates is almost an impossibility yet I have seen it done successfully.

Fancy skating is not so much practiced now in Nova Scotia as formerly; more attention is paid to games on ice. Ricket is the favorite pastime, and is played thus. Two rickets are formed at about the same distance, one from the other, that cricketers place their wickets. If there are many players, the rickets are futher apart. A ricket consists of two stones – about as large as the cobble stones with which some of our streets have been lately paved – placed about three of four feet apart and frozen to the ice. Sides are then formed by two persons – one opposed to the other – tossing or drawing lots for first choice of partners. 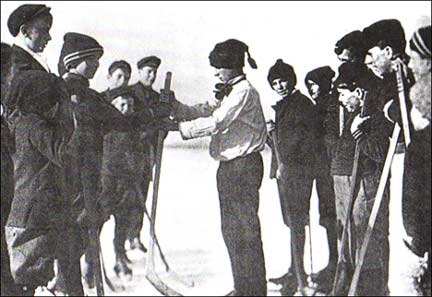 The one who obtains the first choice selects one from the crowd, the other party then chooses another, and so on alternately, until a sufficient number is obtained on each side. Any number can play the game, and generally, the “more the merrier”. Each ricketer is provided with a hurley (or hockey, as it is termed here,) and all being ready a ball is thrown in the air, which is the signal to commence play, previous to which, however, a ricket is chosen by each side and placed in charge of a man whose duty it is to prevent the ball from passing through. The game maybe 10, 15 or 20, or any number agreed upon, the side counting the number first being the winners. The counting consists in putting the ball through your adversary’s ricket, each time counting one. From the moment the ball touches the ice, at the commencement of the game; it must not be taken in the hand until the conclusion, but must be carried or struck about the ice with the hurlies. A good player – and to be a good player you must be a good skater – will take the ball at the point of his hurley and carry it around the pond and through the crowd which surrounds him trying to take it from him; until he works it near his opponents ricket, and “then comes the tug of war,” both sides striving for the mastery. Whenever the ball is put through the ricket a shout “game ho!” resounds from shore to shore and dies away in hundreds of echos through the hills. Ricket is the most exciting game played on the ice”

Editor’s Note:… “It might be well if some of our agile skaters would introduce the game. It would be a fine addition to our winter sports, and give a new zest to the delightful excercise of skating. We have sent down for a set of hurleys preparatory to its introduction.”